If you’re familiar with Austin Powers: Goldmember, you might remember the title villain repeatedly asking other characters throughout the film about a “smoke and a pancake.” While The Vault Downtown might not feature pancakes, we do offer cigars and drinks of the highest quality. If you fancy both, then we’ve compiled a list of drinks that always go well with a cigar. So, get your stogies ready. 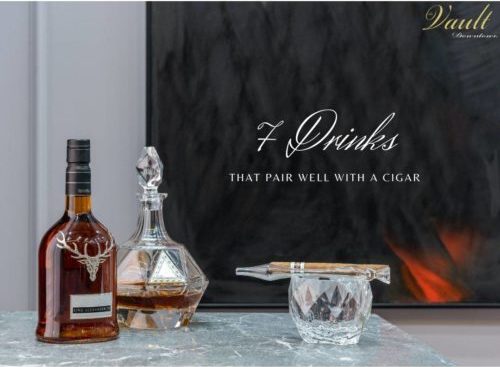 While this may be a bit cliché, cognac is one of the best drinks to have with a cigar. When cracking open a bottle, pay close attention to the age, it’s recommended that cognac over four years old be chosen.

When it comes to scotch, be on the lookout for both its age and processing. A single malt aged at least 12 years is favorable, unlike the blended scotch whiskeys that are usually available for a lower price.

This product of Portugal is one of the most extravagant of all wines and is often served alongside dessert. Its combination of being strong and sweet makes for a good cigar companion. Unlike other wines, you can expect to pay anywhere from 30 to 50 dollars a bottle.

Habitual smokers will tell you that there’s something special about having a smoke with their morning coffee. A coffee-flavored cocktail with a cigar is just as satisfying. Drinks made with baileys such as Irish coffee provide a soothing taste that’s accentuated by an accompanying cigar.

Rum and cigars have always paired well together, as they originate from the same geographic location. For many years, cigars have been synonymous with Cuba and the best rum has generally originated from the Caribbean. There are plenty of inexpensive rums that can diminish the benefits of a good cigar, so choose wisely.

One of the best alternatives to Baileys is Kahlua. A coffee liqueur made in Mexico, its sweet flavor gives it its distinct taste and is found in mudslides and white Russians. Both of them pair well with any cigar.

A martini is the ultimate drink of sophistication and the social elite. There are a variety of flavors, and as James Bond suggests, they’re best served shaken and not stirred. Their high alcohol content makes them ideal for any cigar smoking session.

Cigars and cocktails always go hand in hand, and at The Vault Downtown, you can experience both in an establishment that’s as sophisticated as it is welcoming. Visit our site for menu choices and reservations.