Whenever you visit a steakhouse there are many delicious options on the menu to choose from. One of the biggest debates at the table may be ordering the Filet Mignon or the NY Strip Steak. Let’s settle this classic debate by taking a closer look at both delicious meals. 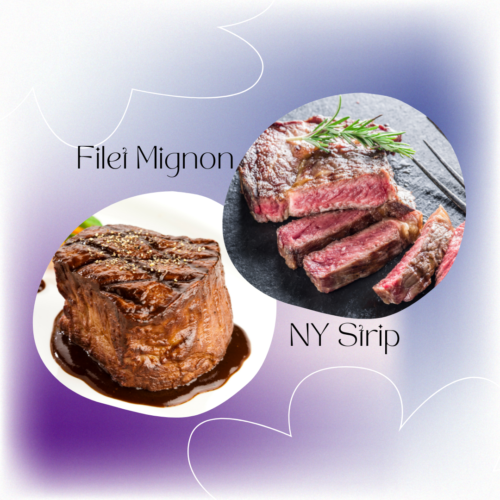 Filet mignon is best known for its amazing taste, tenderness, and juiciness. This steak comes from the muscles on the cow that aren’t really used often which is the reason it gets its tenderness. New York strip steaks have more fat on the sides and are a bit chewier. This steak can also come with the bone in and is known by a few other names including the Kansas City strip, porterhouse, and T-bone.

The price of both steaks will always vary depending on the grade of the meat that’s offered. A prime cut of filet mignon will cost you about $3.25 per ounce while a New York strip is usually around $2.50 per ounce. The New York strip is larger so even though it’s cheaper by the ounce, you’ll be paying more but also receiving a larger piece of meat.

One of the main differences between the two is the location that the beef comes from. The New York strip comes from the lower half of the cow’s ribs otherwise known as the short loin. This area is right next to the tenderloin muscle which is what the filet mignon is made from. This is also the most tender meat that’s found on the cow giving the filet mignon a tenderness above the rest.

The location of the meat also determines the taste and texture of both steaks. Filet mignon has been known to be the best cut of beef that you can get. It’s both juicy and tender while having an almost buttery taste to it. This steak is also known for its marbling throughout the piece of meat. The New York strip has a lot less marbling throughout and also has more fat on the sides of the steak. This makes the meat a little more chewy with a little less flavor than the mignon.

Both filet mignon and the New York strip have their own unique qualities and delicious flavors that are loved by many. Whatever your choice of meat is, The Vault Downtown has an option for you. Come try our top-notch steaks by visiting us at 401 Federal St. Bluefield, WV 24701 or call to make your reservation today! 304-308-6601