How much do you know about the history of cigars? Perhaps you’ve heard that they have a Latin American heritage, but there’s a little more to it, of course. Since we specialize in fine dining, tasty bourbons and wines, and cigars, we thought it would be fun to delve into the history of one of our core competencies. Here’s a short primer on the history of cigars. 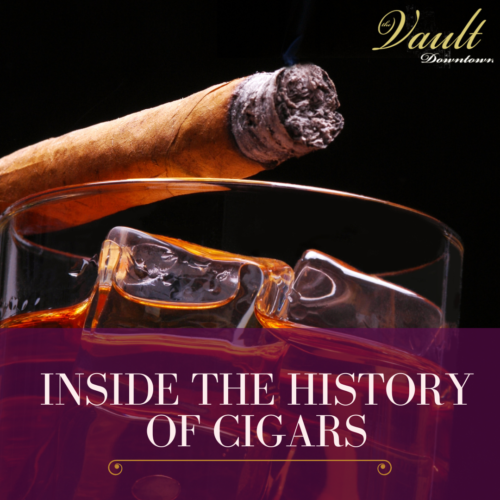 Inside the History of Cigars

The archaeological record shows that cigars have been around since at least the 10th century, and probably earlier than that. There’s ancient Mayan pottery that depicts the indigenous folks enjoying sturdy smoke even during antiquity.

The western world gained its first exposure to cigars as soon as Christopher Columbus arrived in the New World. His crew brought them back to western Europe, where they were popularized by the French Ambassador, Jean Nicot. In fact, his namesake gave us the word “nicotine.” The King of France was quite fond of it, which led to tobacco smoking throughout Europe in the 16th century.

You’ve probably heard a few words about the famous Cuban cigars. Perhaps you’ve tried one from our cigar menu, like the La Gloria Cubana Esteli (Toro). Cuba has always been a great place for cigar production, owing to its fertile soil and warm weather. There have been multiple instances, however, where Cuba has experienced external isolation, making them unable to distribute them worldwide.

The most recent occurrence happened amid the Cold War tensions of the 1960s. President John F. Kennedy placed a trade embargo on Cuba in 1962, but only after securing over 1,000 Cuban cigars for himself. This made it a lot harder for Americans to get them, but it’s still possible to obtain them through other international markets. Although the U.S. has lifted travel restrictions with Cuba, the Cold War trade embargo exists to this day.

Come Try a Cigar with us at The Vault Downtown

The Vault Downtown has 38 enticing cigars for you to try. This includes an array of flavors and styles at varying prices. Our most premium cigars come from the Arturo Fuente Opus X series. They have rich and bold tastes but are highly palatable, and well-regarded as the gold standard for cigars.

We hope you enjoyed this brief history of cigars and will visit us to sample one of our outstanding selections.

The Vault Downtown offers the best chance to enjoy cigars, drinks, and food in a relaxing ambiance in downtown Bluefield, WV. We’re happy to show you all you need to know about cigars even if you’ve never smoked one. Contact us to learn more about our cigar lounge and other services by calling 304-308-6601.