Where did they ever get the idea for the delicious dish, shrimp scampi? We all know there are a thousand ways to cook or prepare shrimp, but this is one of the most favorite. Here’s a brief primer on the history of shrimp scampi. Hopefully, after reading, you’ll be hungry enough to join us for some at The Vault Downtown. 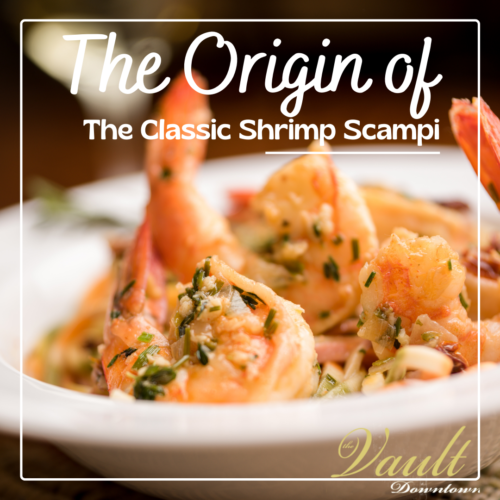 First, it may help to know what the term “shrimp scampi” means. It’s a bit of a strange term, actually. Although the dish originated in Italy, the name translates as “large shrimp” or “prawn.”

Does this mean they used larger-than-average shrimp for the dish?

Perhaps, but there’s also reason to believe that chefs intended to create a lobster dish. Because of lobster shortages, they had to improvise by making modifications to a Norwegian lobster, known as langoustine. They would cut it into pieces and fry it to create the earliest version of scampi. The British invented this in the 18th century but it was, however, the Italians that combined scampi with pasta and garlic seasoning to make something closer to what we enjoy today.

When did it become popular?

Right after WWII, British chefs at the Ritz Hotel in London revived the concept when they had yet another lobster shortage, and needed an acceptable replacement. They took the langoustine, cut it into fine pieces, deep fried it, and ultimately created a popular seafood dish.

Is there a difference between shrimp and scampi?

Yes, but today the difference boils down to which size shrimp you would use to create the dish. Most scampi does not include lobster any longer. In general, scampi refers to a larger shrimp cooked in garlic, butter, and/or olive oil.

Enjoy Shrimp Scampi & Other Delicious Seafood at The Vault Downtown

Shrimp scampi is one of our more popular menu items because it’s a healthy and delicious seafood that we saute and accompany with baby spinach. We have other seafood items as well, including Florida Red Snapper, Cedar Plank Roasted Salmon, and Linguini & Crab. You can also begin your meal with starters like oysters, mussels, and jumbo shrimp cocktails.

The Vault Downtown is the best place in Bluefield, WV, for seafood, NY strip, multiple pasta dishes, great drinks, and premium cigars. Come join us with your friends soon for shrimp scampi and a few drinks. You can reach us for questions, comments, or suggestions at 304-308-6601.